In this part, you will examine the relationship between earthquakes and cities, and investigate earthquakes in a specific area in California.

Click on the Advanced Interface button at the bottom of the Global GIS Tools window. You will notice the additional tools now at the top of your computer screen.

Make major cities the active theme by clicking once on it. Clear any previous city selections

Make earthquakes the active theme by clicking once on it. Clear any previous earthquake selections

Under the Theme pull-down menu, press "Select By Theme" to discover how many earthquakes are within 50 kilometers of major cities. 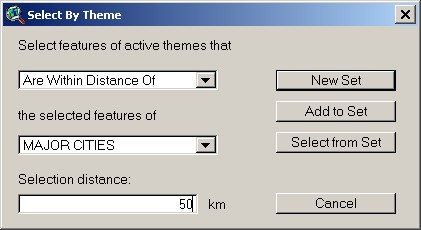 . Look in the upper left of your computer screen.

As you move around the map, notice the latitude and longitude values to the upper right of the view (map) window.

in Global GIS Tools. Go to "Datasets" and select the earthquakes theme.

Based on this information, go back to your map and examine the time when the three earthquakes occurred. List the earthquakes below in the order of their occurrence.

Drag a new search radius – a circle -- from these two earthquakes until the circle just touches the Pacific coastline. This should be a 13 kilometer search radius, and the number 13 should appear in the kilometers field.

and click on the earthquake on the map again. Print the map report of this area.

You need to assess possible damage from future earthquakes in this region in your report, in terms of roads, airports, and population.