In this part, you will investigate one of the worst earthquakes ever to strike the United States, assess critical infrastructure, and assess the relationship of fault lines to earthquakes.

The USGS has indicated that your report needs to include an analysis of the following earthquake: In October 1989, as over 62,000 fans filled Candlestick Park for the third game of the World Series baseball game and millions of San Francisco Bay Area workers were commuting home, a major earthquake struck. This was the Loma Prieta Earthquake, damaging many neighborhoods in San Francisco and Oakland, and collapsing a major portion of an interstate highway in Oakland, killing many of the drivers.

Make themes you have been working with the active theme by clicking once on it. Use shift-click to select multiple themes. Clear any previous selections

the table to find the Loma Prieta earthquake by its date and magnitude, as follows. Be sure to enter the information by clicking on the field names and equals sign. 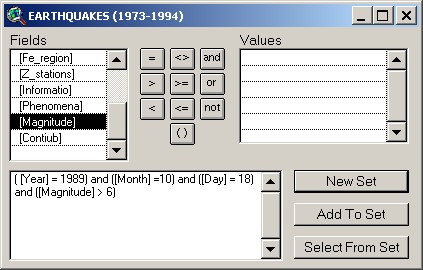 Next, you will examine faults in relationship to earthquakes throughout North America.

Turn off all themes except faults, Alaska faults, US faults, earthquakes, and the shaded relief base.

Zoom out to all of North America using the globe symbol on the Global GIS Tools menu.

It is difficult to detect the relationship of earthquakes and faults, because of the large number of earthquakes. Reduce this number by clicking on “earthquake tools” in your Global GIS window. Show magnitudes between 6 and 9, as follows: 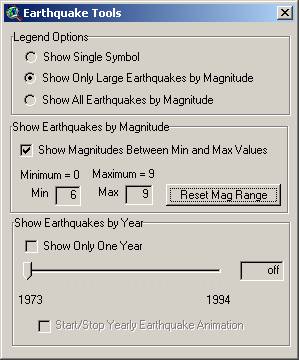