In January 1992, a container ship headed to Tacoma,Washington, from Hong Kong, China, lost 12 containers during severe storm conditions. One container held a shipment of 29,000 bathtub toys. Ten months later, the first of these plastic toys began to wash up onto the coast of Alaska. Driven by the wind and ocean currents, these toys continued to wash ashore during the next several years, and some even drifted into the Atlantic Ocean.

The ultimate reason for the world’s surface ocean currents is the sun. Solar heating creates wind that blows over the ocean, generating surface waves by transferring some of the wind’s energy in the form of momentum, from the air to the water. This constant push on the surface of the ocean is the force that forms surface currents.

While these currents represent shallow-level circulation, global circulation extending to the depths of the sea is known as the “Great Ocean Conveyor.” Also called the thermohaline circulation, the Great Ocean Conveyor is driven by differences in density of sea water, which in turn is controlled by temperature (thermal) and salinity (haline) factors. Each winter, as new sea ice forms in the far North Atlantic Ocean,  the salt left behind in the ocean makes the water very dense. This dense water sinks to the ocean floor and is the “engine” for Great Ocean Conveyor’s motion. 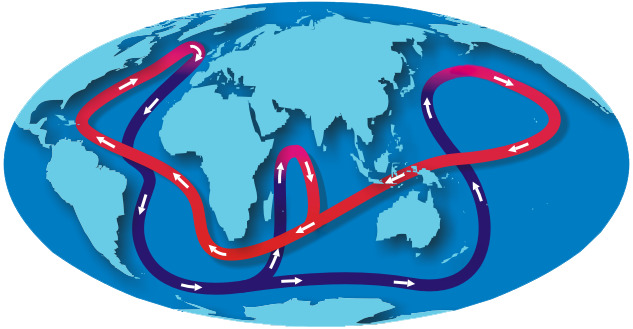 This deep, slow, southward-flowing current follows a route through the Atlantic Basin around South Africa and into the Indian Ocean and on past Australia into the Pacific Ocean Basin. Scientists estimate that the deep, salty water sinking to the bottom of the North Atlantic Ocean takes between 1,000 and 1,200 years to rise to the upper levels of the ocean.

To learn more about oceans, climate, weather, and atmosphere visit the Jetstream Online School for Weather at http://www.srh.noaa.gov/srh/jetstream.

Metadata for: The Great Ocean Conveyor