Adapted from "The High Plains: Land of Extremes" Bureau of Land Management, 1996

Water that accumulates beneath the surface of the Earth is called groundwater. Contrary to popular belief, groundwater does not form underground "rivers," but is actually found in the small spaces and cracks between rocks and other material such as sand and gravel. Groundwater supplies about 38 percent of the water used for agriculture in the United States. The layer of earth, gravel, or porous stone that yields water is called an aquifer. If hazardous waste, chemicals, heavy metals, or oil collect on the surface of the ground, rain or runoff percolating into the soil can carry these substances into the groundwater. The following activity involves learning how water moves through rock materials such as sand, gravel, and clay. 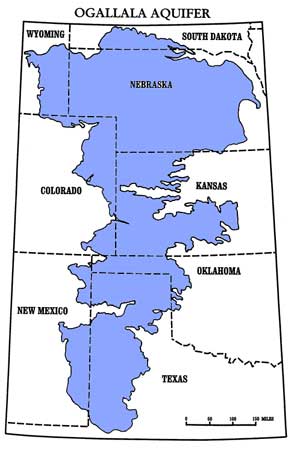 The Ogallala Aquifer (pronounced Oh-Ga-La-La) is one of the largest aquifer systems in the world, stretching across parts of eight states - South Dakota, Nebraska, Wyoming, Colorado, Kansas, Oklahoma, New Mexico, and Texas - and underlying about 174,000 square miles. It is approximately the size of California and contains an estimated 4,000,000,000,000,000 liters of water.